No major swing to the right in the UK General Election!


Liberals and moderates won the popular vote in the UK General Election but they are not in power! 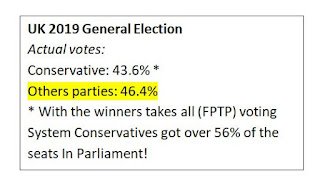 result." My reply is yes, disappointed and worried but not upset. The views of moderate reasonable and caring people are not dead. They are just frustrated by our political voting system (FPTP). Have people swung to the right over Europe?  I don't think so.  Here in Lewes, Liberal Democrats have cut the Conservative majority in Lewes in half and have increased their share of the vote by 4.1% with the Tory share of the vote reduced by 1.6%.

British philosopher and author A.C. Grayling estimates that 16.5 million voted for Remain candidates and 14.5 for Leave candidates. Or put it another way in the general election the Conservatives got just over 13.9 million votes which equates to 43.6% votes. Those not voting for a right-wing candidate amounted to over 46% of the vote. Either way, the country has not lurched to the right. The voting system has lurched to the right! For an analysis of votes cast and percentages see the BBC election website 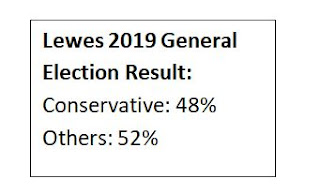 I'm not pleased at the prospect of another 5 years of Maria Caulfield (the ERG member and firm Brexiteer) but the constituency has not turned to the right. 52% of the people did not vote for her. She got 48%. The 52/48% split is roughly how the Lewes area voted in the EU Referendum. We were a Remain area and we still are now!

As far as the Liberal Democrats are concerned they are alive and kicking. Yes the Liberal Democrats only got 11 seats in Parliament whilst under a proportional representation their 3.6+ million votes would have delivered them 75 seats. But these 3.6 million people can be a force to peacefully and determinedly try and keep the flame of liberalism alive in this country.

However a more right-wing government has taken over control in the UK and they will be in power for 5 years and we continue to have a right-wing press (the Daily Mail, the Express, the Sun and the Telegraph). That is a worry. Under the Conservatives things have already happened over the last 4 1/2 years which seriously concern me. In my old council ward for example in Lewes district why should a German woman who has been married to an English guy living here for 20 years with children born here have to apply for the 'right to stay'? That's just one example of my concerns.  I'm also concerned that we are coming out of Europe. Mr Putin has openly declared his desire for the breakup of the EU and that's not good for world peace. I'm worried because for the time being at least and out of Europe, the UK will be forming closer relationships with the USA under the pressure and control of a right-wing US president.

It's going to be a tough 5 years but that's all the more reason for Liberal Democrats to continue to challenge the government to ensure there is more of a level playing ground and fairness for all of the people in this country including those who didn't vote for the Conservatives (over 14 million) and those who didn't vote for Brexit (over 16 million) in the 2016 referendum where people were persuaded by false arguments, lies and manufactured fears.

Liberalism:
I define myself as a liberal and to me that goes beyond a following of a political party. In fact I would give a closer definition to my own belief "to protect the rights of the individual whilst having a responsibility to the community”. I desire to achieve a society where extremes, conflict and war have no place, where we live in harmony, where justice and truth prevails and where we tread lightly on our planet for the future of our children and grandchildren. Lewes is the right place to remember Thomas Paine's words which echo in my mind at such times as this  ".........The problem, then, is to devise a system that gives government the power necessary to protect individual liberty but also prevents those who govern from abusing that power”.